First ... This homie from Gbg came down to get some new stuff today ! A cupid-like chick with a slingshot , he says !!! Cool ! Here ya go bro ! Throw in a few grenades and some fancy panties and you got yourself a sweet new piece !! The pictures turned out perfect for a fresh one-shot ! I also took the opportunity to finally take some final shots of his lower arm too !! Been trying to take pictures of that piece for ever now !! Finally managed ! So here it is ... The chess/death piece all healed up and looking good !! 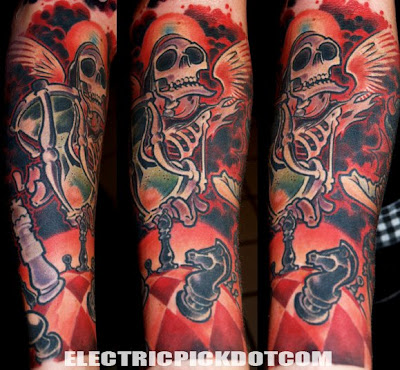 Also in the tattoo Plogging news ! Here's a piece I did a few weeks ago that got lost in the computer change/mayhem I had going on !! Just found it again !! Here ya go Marco !! You'd been waiting for this one , mate !!!! We had almost managed to finish it but it looks like some more will be needed !!! Next time I'm in Rotterdam , it'll be done , fo sho !!

Thanks a lot buddy. Super sweetresult. The pic is on my blog. The tat is healed and the colours look beatiful, I am amazed about the monkey!