Last time on the Electric Plog :

I must admit , I had had a bit of a hard time arranging my calendar stuff for the Richmond part of the trip ! After being stood up the first day ( Thursday ) ... I realized ( on Friday morning ) that my calendar was a bit more of a mess than I thought and found myself with two appointments ( just for the record , none of which had been booked on Thursday ) ... At the same time ! So , after learning they both wanted robots !!! I know , awesome !! I decided to make a Double-Robo-Wamo-Friday ...


This homie came down from Buffalo , NY for this awesome super dramatic piece !!! Truly love this one !!! We had fun ( mostly me ) for 4 hours , on this awesome piece !! See , what happened is , This young space cadet took a bit of a wrong turn in an asteroid field and done crashed her astro-rocket down on this unforgiving planet ! Kablamo !! Passed out ... However , Lucky for her , this robot can't resist a damsel in distress and decided to help out !! 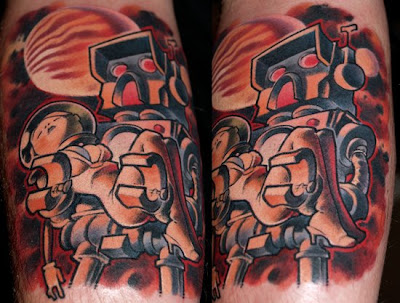 Not all robots are bad !

And number 2 ... 3 hours worth ! Magna-bot , here , either got stuck , got lost in the big city ( lives on a dirt road ) or just got outta bed on the wrong side this morning but ... He's obviously having a shit day ! There's no telling what will happen next !! Watch out people of TokyoShanghaiHongKong !! ( Name of the city ) 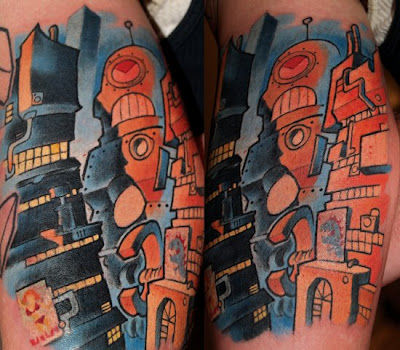 And just for the record !! 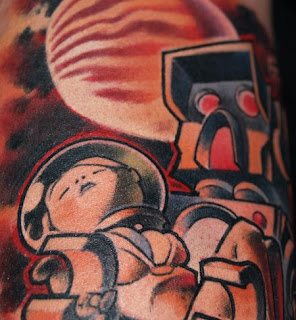 Just wanted to say thanks again! By far the most super badass ink i've gotten to date. I'm getting ready for round 2 next time you come to the states!

Glad to hear you're back in one piece!

See you the 5'th of september to (hopefully) finish the robot crushing!

I cant stop staring at that first robot. You bastard. (not that the other one is less carambalicious..)