There was a convention ! Mhm ... That's right ! Now ... Most of you tattoo artists out there are used to these and probably even like doing them ! Which is totally fine , I just , personally , don't ! Maybe cuz I'm too antisocial or cuz I prefer working in the comfort of a shop but I just don't really like these shows that much ! So ... For the last few years I've been doing one a year and every time I'm done with one , I still think that was one too many that year ! Don't get me wrong they can be a lot of fun for many things ... Just don't enjoy actually working at them ! I was thinking of writing all about all the little things I don't like about them ... But after a little conversation with my buddy Jesse ( sitting right next to me right now ) I've decided to spare you the ranting ! I've , however , just decided that this was my last "working" convention ! Just really got sick of hearing myself rant about it really !!! All this said ... This last Evian show was a very nice , well organized convention and if you happen to like conventions ... This is a very nice local show !! True story !!

Now here are some shots !

Day one ... A few hours on the pink cat factory and some random sketching ... 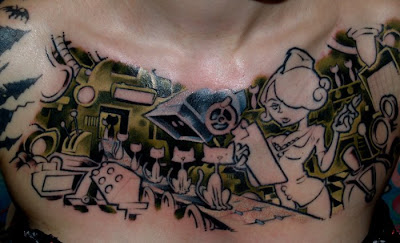 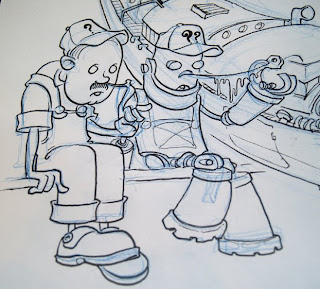 Day two ... A flying bear ! Or is it ?? 5 hours of lines on a one year old piece ! Happy all the lines are done now !! More of this hopefully before an other year passes !! 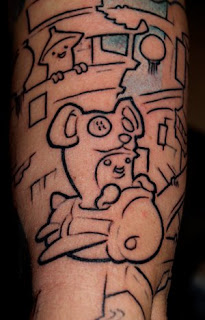 luv that chest piece,thats cool im not at that stage in my career that id do a conv. but i imagine it'd b difficult to wurk at one