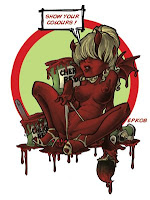 Been working hard for the last few days on some sweet ( dirty ) T-shirts for the E-Pupermarket !! And stuff is starting to look good !! Still nowhere near as much finished stuff as I should have by now ... But still something !! Won't show them till the whole first series is done ... But here's a teaser !

Also dropped by the gallery earlier today ! Just to say hi ... And learned that the two city pieces I had just brought in before my last week trip , are already gone ! Hurra for me !! But now I got to fill up my space again !!! Not complaining !!