... In dead ! You see ... The demon lord of everything ultimately heavy ( I.e. Metal , Grudge , Doom and Stoner ) Had left his instrument of ultimate doom bringing poorly guarded in the hands of his army of the undead ( everyone evil should have an army of undead )! A helpless unsuspecting soul fell on the unholy device and was instantly possessed by it's raw , unhindered , pure rock power and got consumed while bringing down rock doom around it ! 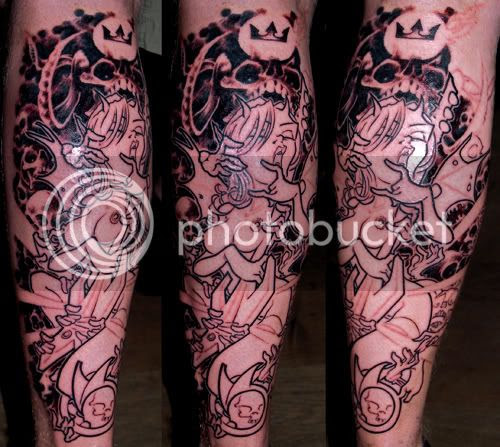 Or just a sweet tat ! However ... 5 hrs , of which at least 1 spent in the ditch behind the knee , gave my customer of the day the right to the so coveted title of Trooper ! Awesome piece !! It's always hard to come up with something illustrating music ! But this one was a charm ! As soon as he told me "Heavy" I took the challenge to redefine the term !!

Colours should be appearing in July ! Keep an eye out for this one !

What a guy, he definitely earned his trooper badge! (We should make badges!!!)

And hey, it's purple pants today!

oh my evil prince of darkness !
i was never know about your devilishness !