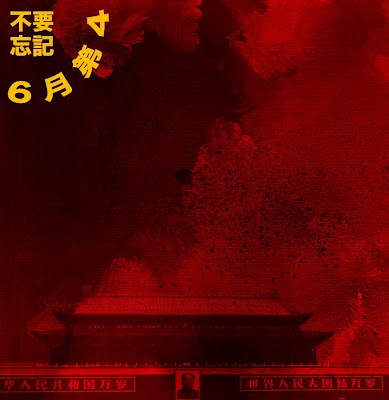 Now don't get me wrong ... I really love China and am in no way a blind advocate of democracy ! Like the saying goes , I truly believe that "Democracy is the worst form of government , except for all the others!" I do believe , however , in responsible governments ! Weather it be an elected president , a king or a party chairman , a people's administration works for these people and should act accordingly ! What happened all over China in Spring of 89 was a movement for change led by the students but supported by the people of China from all walks of life and from all over the country and the way it was stopped by the then Chinese administration is a crime of the most ruthless kind ! The people responsible for it , Deng Xiaoping , his army of supporting golden age generals and politicians , all the people between this governing body and the guns that fired on the students who supported this ruthless action should be remembered as the one's responsible and should be remembered as such for a very long time ! However still , anybody who acted or directed in the disinformation campaign that followed and is still very alive today should also be held accountable ! There is nothing worst than not knowing and the lies that followed were almost as destructive as the acts that were perpetrated all over China on that day in June ! Still today the disinformation campaign continues ! The last , very scary comments on the subject , from HK Governor Donald Tsang prove this disturbing fact ! China will never be able to come to terms and turn the page on this disturbing fact of it's history until it can know what really happened !

When a peoples administration choses to kill it's own citizens by the hundreds to shut them up ... However much time passes and whether dead or alive , the people responsible must one day face the blame !

I hear you buddy and totally agree. But we're talking about China here. The government will never apologize of what happened. Why? Why should they. The whole country is run by such an iron fist that there's absolutely nothing anybody can do about it. And by knowing their ways, I wouldn't do anything about it either if I was Chinese. I read about this woman who's son was shot back then, aged 17, and she's been fucking grounded at her own home at this day of "anniversary". And so is a lot of other people who had anything to do with the incident.
This everything is horrible and so very wrong.
ps. But I have to say that the person that REALLY scares the hell outta me is Kim Jong-Il. The little fucker might have long distance missiles that reach all the way to LA, with nuclear warheads. Japan must be thrilled to have that kind of neighbors, launching missile tests OVER their country. You can't even threat them, last time the sanctions left 2-3 million starved to death, and the just didn't give a shit. Outside world is only guessing whats going on in there, nobody really knows. Somebody just got arrested trying to smuggle pictures out of the country! Probably joined the other 3m. He scares me, that man.

thanx for the history lesson nick i never knew all the details of these horrible attrocities, its too bad the armies in these countries blindly follow orders