It's just so amazing when people care!!

The majority of citizens of most western democracies have a tendency to become quite complacent with their democratic duties... It's very impressive, refreshing and quite inspiring to see so many people care here in Hong Kong!! 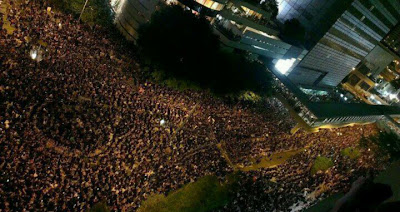 This protest is about stopping the local government (HK) from implementing an education shift with a new "nationalist identity" program (China)! And well... Hong Kongers just won't have it! Sadly we don't have democracy here but if these protests continue (been a week now)... It's happened before... Public pressure might force our unelected government to change or cancel this new scary law!!!

The few people who have managed to get a glance at this new school program have had nothing but scary things to say about it!

It's just awesome to see so many people care... About their education, about their identity and about sticking it to the man!!!!

P.s. I have been working on an epic one for the American elections lately but not ready just yet!!!

We won!!! After massive protest in July, a week of occupying the government HQ, hunger strikes and threats of education strikes... Our non-elected government backed off! Now the new Pro-China national and moral education curriculum will not be mandatory!!

I just heard the movement won! congrats! More power to the people!!