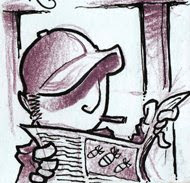 Just dug this sketchbook out of my pile of other sketchbooks ( true story !! I do have a few sketchbooks and they do form a big pile at the end of my H.Q. desk ) ... Had , not quite forgotten about it but just not continued it in a while !! It was supposed to be a book with only the stupid , the unprepared ... Spontaneous and dumb stuff I would randomly think of in black and white only , book ! Started it last year while in Holland last ! And while flipping through it ... Realized that there was a lot of great stuff in that book !! So ... Since there was no way I could get a good shot of what I tattooed all day today ( Which happens to be a piece that is awesome , by the way !!! ) here's a page from this weird sketchbook project ... More to come ! 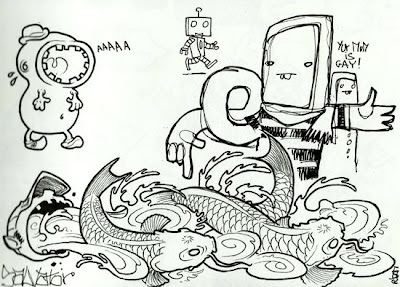 For those of you who like this tattooing thing I do ... Am going to Rotterdam next week for one of my tattoo marathons ... 6 new pieces in 5 days !! Stay tuned !!