Part 2 of the Electric Beijing Show!!!!

So this guy does movies… He also likes robots, chick, his dog and well, himself… So this is what he got! 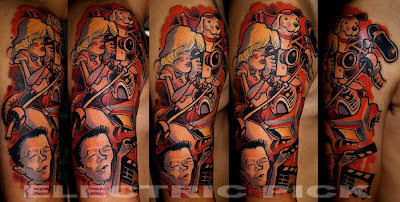 Also, if I might ad… I don't think I've previously explained this… But this Beijing spot was a first for me… You'll understand when you see all the work I got to do, that week. But yeah… It was the first time I had ever done this… Me and YZ previously agreed, it was going to be a blind guest spot!! I liked the idea and definitely the challenge and well I needed to tattoo after 3 months in Hong Kong of barely tattooing at all… But yeah so it was a blind guest spot and as much as I survived it and was a lot of fun… I think it's the last time I'm working that much in a row not knowing what anyone will want to get until they're in front of me!! I'm gonna need to know what people want before they show up for my next trip up there, that's for sure… But it was, indeed, a lot of fun!!!

Oh, i love her Farrah hair!!