Been running around a lot, with always something next on the list to run too, in the last week and well ... The last few days have been very productive !! London is great but I really have to remember not to overbook my traveling schedules like this ! Specially in this town ... So much going on, so much to go and see !! I miss big cities so much ! 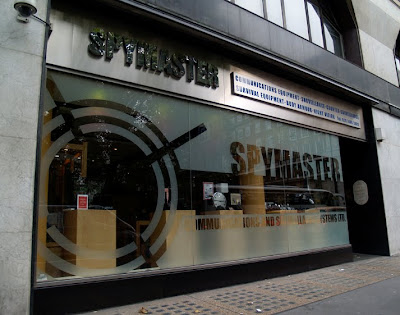 So yeah ! Busy busy ... My Super secret covert spy schedule has been, on the other hand not too stressful since I've been down here in Londontown and that's allowed me to do much more other awesome stuff ! Homie home delivery tattooing, Art-geek drawing parties, lots of analog picture taking (no really a lot), not enough hanging out with homies but still a bit and well ... Work related or not, if there's one thing us super covert spy men of shadows and mystery like to do, that's to go and check out what's new out there ... What's the latest gadgets and new spy related devices to come out and make our dangerous lives easier ... Or just way more awesome ! And being in London and all ... Paying a visit to the good people at the world famous SPYMASTER shop is simply an absolute must !

It is of course, understandably not permitted to take pictures inside this little shrine but here's a quick outside shot so you know what it looks like (above)... Next time you're in London and in need of 360 HD camera glasses, CB and cellphone wave jammers/interceptors/recorders , GPS tracking magnetized coin sized devices that send you a signal of their location (within 1 meter anywhere on Earth) directly on any mobile device or even just shark repellant spray pens ... You'll know where to go !

Mix master Craig aka Tiger heart aaka the African Gweilo, was lucky enough to win a home delivery session yesterday !!
This is how far we managed to get after hours of non stop/no break tattooing (never get tattooed by me while there's a documentary about zombies on TV !!!) ... Not the best pictures (half healed/half fresh deal) but it's been a while since you've seen this one and it's starting to come together >>>>> 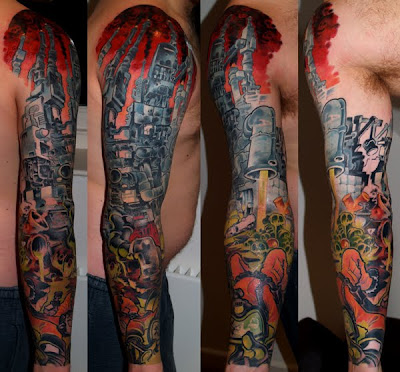 More news shortly as the train I happen to be sitting in is about to get to where I appear to be going ! Fact !